The continuity equation is simply a mathematical expression of the principle of conservation of mass. For a control volume that has a single inlet and a single outlet, the principle of conservation of mass states that, for steady-state flow, the mass flow rate into the volume must equal the mass flow rate out. The continuity equation for this situation is expressed by Equation 3-5.

One of the simplest applications of the continuity equation is determining the change in fluid velocity due to an expansion or contraction in the diameter of a pipe. 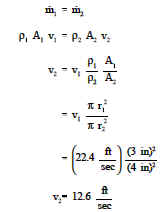 So by using the continuity equation, we find that the increase in pipe diameter from 6 to 8 inches caused a decrease in flow velocity from 22.4 to 12.6 ft/sec.

The continuity equation can also be used to show that a decrease in pipe diameter will cause an increase in flow velocity.

Example: Continuity Equation - Centrifugal Pump The inlet diameter of the reactor coolant pump shown in Figure 3 is 28 in. while the outlet flow through the pump is 9200 lbm/sec. The density of the water is 49 lbm/ft3. What is the velocity at the pump inlet? 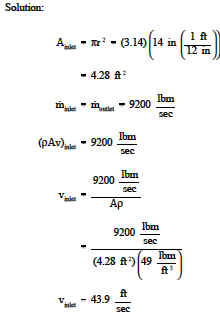 The above example indicates that the flow rate into the system is the same as that out of the system. The same concept is true even though more than one flow path may enter or leave the system at the same time. The mass balance is simply adjusted to state that the sum of all flows entering the system is equal to the sum of all the flows leaving the system if steady-state conditions exist. An example of this physical case is included in the following example.

A piping system has a "Y" configuration for separating the flow as shown in Figure 4. The diameter of the inlet leg is 12 in., and the diameters of the outlet legs are 8 and 10 in. The velocity in the 10 in. leg is 10 ft/sec. The flow through the main portion is 500 lbm/sec. The density of water is 62.4 lbm/ft3. What is the velocity out of the 8 in. pipe section? 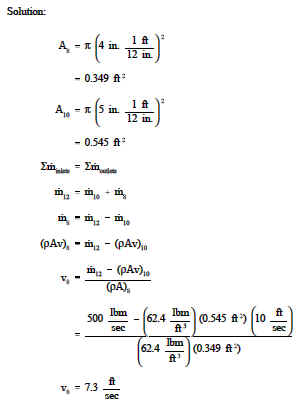