Tire Traction Force, or tractive force, is the  force  used to generate  motion  between a car or truck and the road or tangential surface. 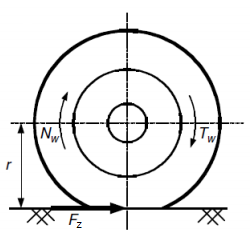 Overall Efficiency in the Drive Train

The maximum permissible traction or force that can be applied to the wheels is governed by two things: the weight of the vehicle and the adhesion coefficient between the tire and the road surface.

More the weight and the adhesion coefficient, more amount of tractive force can be applied to the wheels without causing slips between the tires and road.

In the design of wheeled or tracked vehicles, high traction between wheel and ground is more desirable than low traction, as it allows for higher acceleration (including cornering and braking) without wheel slippage. One notable exception is in the motorsport technique of  drifting , in which rear-wheel traction is purposely lost during high speed cornering.

In some applications, there is a complicated set of trade-offs in choosing materials. For example, soft rubbers often provide better traction but also wear faster and have higher losses when flexed—thus reducing fuel and rolling efficiency.

The traction of trucks, agricultural tractors, wheeled military vehicles, etc. when driving on soft and/or slippery ground can be improved significantly by use of Tire Pressure Control Systems (TPCS). A TPCS makes it possible to reduce and later restore the tire pressure during continuous vehicle operation. Increasing traction by use of a TPCS also reduces tire wear and ride vibration.