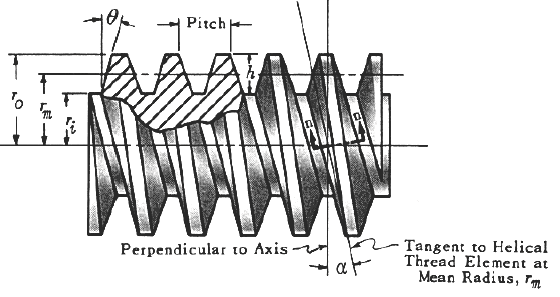 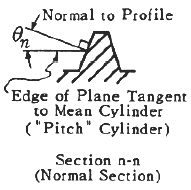 Turning Moment and Axial Load are related to each other through the following equation for advance against load (or raising the load).

Pitch is the distance from a point on one thread to the corresponding point on the next adjacent thread, measure parallel to the axis.
Lead is the distance the screw would advance relative to the nut in one direction. For a single thread screw, lead is equal to the pitch. For a double thread screw, lead is equal to twice the pitch, etc.
Helix angle α is related to the lead and the mean radius rm by the equation:

In some calculations we shall make use of the angle θn measuring the slope of the thread profile in a normal section. This is related to the angle θ in the

Note: That cos θn appears in the equations to follow, it is frequently replaced by cos θ. This yields an approximate equation that, for the usual small values of α, introduces no great error.

The torque required to advance the screw (of nut) in the direction of the load (or lowering the load) is:

This torque may be either positive or negative. If positive, work must be done to advance the screw. If negative, the meaning is that , for equilibrium, the torque must retard rotation, i.e. the axial load alone will cause rotation (the push drill situation). In this case the screw is said to be overhauling.

T = torque applied to turn screw or nut, whichever is rotated, in-lb
W = load parallel to the screw axis, lb
rm = mean thread axis (pitch diameter), in
rc = effective radius of rubbing surface which the load bears collar radius, in
f = coefficient of friction between screw and nut threads
fc - coefficient of friction at collar
α - helix angle of thread ar mean radius, degrees
θn = angle between tangent to tooth profile (on the loaded side) and a radial line, measured in plane normal to thread helix at mean radius, in