A flywheel mounted on a relatively stiff shaft is shown in Fig. a. Considering the equilibrium of torques, 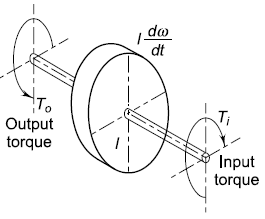 When the driving torque is more than the load torque, the term (Ti - To) is positive and the flywheel is accelerated. When the driving torque is less than the load torque, the term (Ti - To) is negative indicating retardation of flywheel. A T -θ diagram for a particular application is shown in Fig. 2(a). In this case, the power is supplied to the machine by a constant-torque motor, developing a torque Tm. The work cycle of the driven machine consists of three parts—AB, BC and CD. During the elements AB and CD, the torque required by the machine remains constant at T1. At the point B, it increases to T2 and remains constant during the element BC. The cycle is repeated for each revolution. 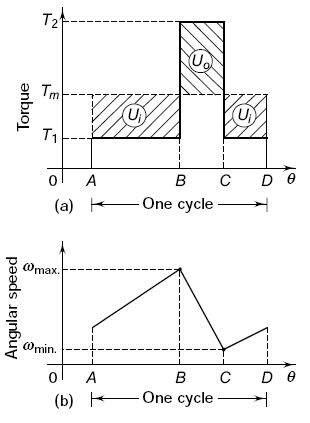 During elements AB and CD, the energy is supplied to the flywheel. The input energy Ui is given by,

where ω is the average or mean angular velocity of the flywheel. It is given by, 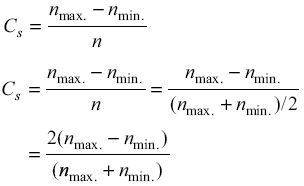 where n is the speed in rpm.

Table 1, Coefficients of Fluctuations of Speed