The Vickers test can be used for all metals and has one of the widest scales among hardness tests. The unit of hardness given by the test is known as the Vickers Pyramid Number ( HV ) or Diamond Pyramid Hardness ( DPH ). The hardness number can be converted into units of pascals , but should not be confused with pressure, which also has units of pascals. The hardness number is determined by the load over the surface area of the indentation and not the area normal to the force, and is therefore not pressure.

It was decided that the indenter shape should be capable of producing geometrically similar impressions, irrespective of size; the impression should have well-defined points of measurement; and the indenter should have high resistance to self-deformation. A diamond in the form of a square-based pyramid satisfied these conditions. It had been established that the ideal size of a Brinell impression was 3/8 of the ball diameter. As two tangents to the circle at the ends of a chord 3 d /8 long intersect at 136°, it was decided to use this as the included angle of the indenter, giving an angle to the horizontal plane of 22° on each side. The angle was varied experimentally and it was found that the hardness value obtained on a homogeneous piece of material remained constant, irrespective of load. Accordingly, loads of various magnitudes are applied to a flat surface, depending on the hardness of the material to be measured. 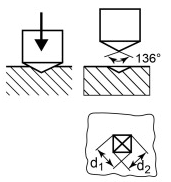 The HV number is then determined by the ratio F/A , where F is the force applied to the diamond in kilograms-force and A is the surface area of the resulting indentation in square millimeters. A can be determined by the formula. In this test, a small pyramidal diamond is pressed into the metal being tested. The Vickers Hardness number (HV) is the ratio of the load applied to the surface area of the indention. This is done with the following calculator and formula.

The indenter is made of diamond, and is in the form of a square-based pyramid having an angle of 136 degrees between faces. The facets are highly-polished, free from surface imperfections, and the point is sharp. The loads applied vary from 1 to 120 kg; the standard loads are 5, 10, 20, 30, 50, 100, and 120 kg. For most hardness testing, 50 kg is maximum.

A Vickers hardness tester should be calibrated to meet ASTM standard E10 specifications, acceptable for use over a loading range.