Selecting the Right Fan or Blower for Your Application

Selecting the Right Fan or Blower for Your Application

Sizing of fans and blowers is similar in process to that of pumps, where graphs are commonly used. The performance graph is usually a constant-speed plot with capacity on the X axis and a variety of performance factors on the Y axis. As part of the selection process, a graph of the system is also generated, with capacity as the X axis and head (energy loss in the system) on the Y axis. As with pumps, the operating point of a fan is found at the intersection of the performance graph and the system graph. When multiple system curves are applicable, as with variable duct geometry or variable static pressure, there will be multiple operating points. When multiple performance curves are available, as with adjustable impeller vane angle, damper control, or variable speed, there will be multiple operating points. A slightly undersized fan is preferable to an oversized fan because of lower cost and increased stability.

Operating a fan or blower at much lower than rated capacity can result in pulsations and instability due to a variety of factors. This should be avoided. To ensure stable fan and blower operation, the engineer should select an operating point where the slope of the pressure or capacity performance curve has opposite sign as the system curve. This is usually the case, except at or above design capacity. Pulsation can be avoided by selecting an operating point to the right of the surge point. If this is not possible, speed control, impeller geometry control, inlet dampers, exhaust dampers, and bleed lines may be employed. Changing a fan’s speed cannot be used to stabilize a fan operating in an unstable condition. According to affinity, if an operating point for a fan is in an unstable region to the left of the peak, it will remain in an unstable region at any speed.

Multiple fans may be called for in some applications to avoid pressure buildup in a space or to fit a space constraint. When demand or system conditions are highly variable, multiple fans may serve the need better than a single fan. Because operating point is based on capacity, if capacity varies the operating point will move along the performance curve and may depart from reasonable efficiency for the fan or blower. In these cases, one fan is sized for one operating point, and additional fans are called into service as needed to provide additional capacity. Fans or blowers in parallel and series follow the same additive rules as pumps. Instability can occur in parallel fan systems when the combined performance curve intersects the system curve at a point where the individual operating points are widely separated. In that condition, the fans may suddenly exchange loading and shock the mechanism and/or ductwork. To avoid this, fans in parallel must be carefully matched to the system.

Fan Curves are typically provided by the fan or blower OEM or can be developed with testing. 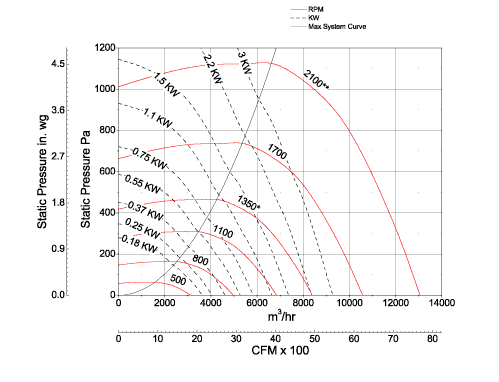 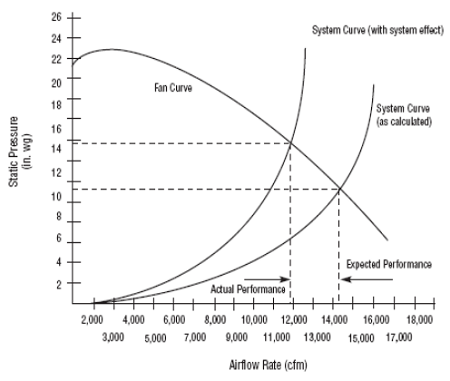