A flammable liquid’s vapor pressure and volatility or rate of evaporation determine its ability to form an explosive mixture. These properties can be expressed by the flash point, which is the temperature to which a flammable liquid must be heated to produce a flash when a small flame is passed across the surface of the liquid. Depending on the test methods, either the open- or closed-cup flash point may be listed. The higher the flash point, the more safely the liquid can be handled. Liquids with flash points higher than 100°F are called combustible, whereas those under 100°F are described as flammable. Those with flash points less than 70°F should be regarded as highly flammable.

Table 1.0 Flammable Limits of Some Gases and Vapors

The following formula allows for the calculation of flash points

This particular calculation is, unfortunately, not very accurate (variation with measured values can be as high as 100°C!) and requires the knowledge of the constants in Table 4-8 as well as the knowledge of the vapor pressure of the compound. Another more simplistic mathematical calculation starts with the autoignition temperature (AIT) in degrees Celsius of the compound . It is shown in Table 2.0 .

nHr = number of hydrogen in radicals

These requirements are defined in a classification system which is published in OSHA Standard 1910.106. 38 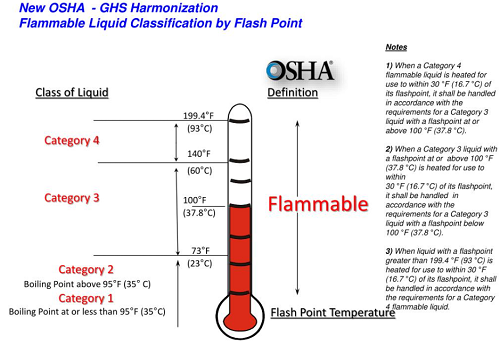