In fluid dynamics , the Darcy–Weisbach equation is a phenomenological equation, which relates the head loss — or pressure loss — due to friction along a given length of pipe to the average velocity of the fluid flow.

The frictional head loss can be calculated using a mathematical relationship that is known as Darcys equation for head loss. The equation takes two distinct forms. The first form of Darcys equation determines the losses in the system associated with the length of the pipe. 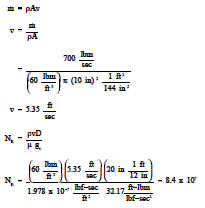