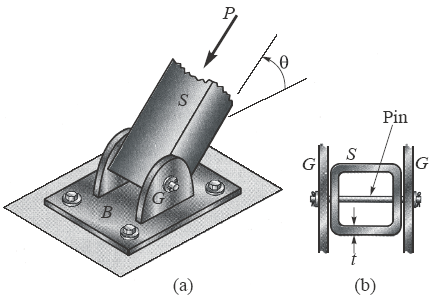 Figure 1
(a) Pin connection between strut S and base plate B. (b) Cross section through the strut S

Shear stress in pin. As can be seen from figure (b), the pin tends to shear on two planes, namely, the planes between the strut and the gussets. Therefore, the average shear stress in the pin (which is in double shear) is equal to the total load applied to the pin divided by twice its cross-sectional area:

(3) Bearing stress between pin and gussets. The pin bears against the gussets at two locations, so the bearing area is twice the thickness of the gussets times the pin diameter; thus:

(5) Shear stress in anchor bolts. The average shear stress in the anchor bolts is equal to the horizontal component of the force P divided by the total cross-sectional area of four bolts (note that each bolt is in single shear). Therefore:

Note. Any friction between the base plate and the mounting surface would reduce the load on the anchor bolts.