Rod of Nonuniform Diameter, Change of Length Under Axial Force Formula and Calculator

When applying equal and opposite forces to the ends of a rod of nonuniform diameter, as shown in Figure 1. If the tension stress created in the rod is below the proportional limit, we can use Hooke’s law and the relationship between springs in series to compute the change in length of the rod. 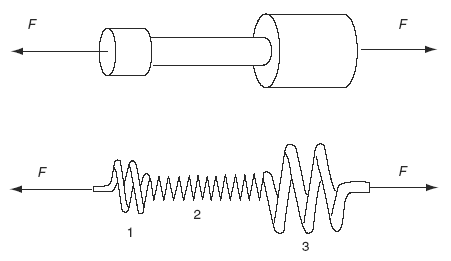 The combined change in length of the rod will be equal to the sum of the changes in each section:

Hooke’s law tells that the change in one section will be:

Since the various sections are connected in series, they each see the same force, so we can combine Equations 1 and 2 above and write

the spring constant of a body is defined as

The spring constant of a group of bodies, connected in series, is