The purpose of AGMA and ANSI standards is to establish a common base for rating various types of gears for differing applications, and to encourage the maximum practical degree of uniformity and consistency between rating practices within the gear industry. It provides the basis from which more detailed AGMA application standards are developed, and provides a basis for calculation of approximate ratings in the absence of such standards.

The formulas presented contain factors whose values vary significantly depending on application, system effects, gear accuracy, manufacturing practice, and definition of gear failure. Proper evaluation of these factors is essential for realistic ratings. The AGMA/ANSI standards is intended for use by the experienced gear designer capable of selecting reasonable values for rating factors and aware of the performance of similar designs through test results or operating experience.

The intent of the AGMA strength rating formula is to determine the load which can be transmitted for the design life of the gear drive without causing root fillet cracking.

The contact stress number formula for gear teeth is:

elastic coefficient Cp is defined by the following;

µP and µG is Poisson’s ratio for pinion and gear, respectively;

EP and EG is modulus of elasticity for pinion and gear, respectively, lb/in2.

Overload factor, Ko is intended to account for the operating characteristics of the driving and driven equipment. It must be recognized, however, that if the operating roughness of the driver, gearbox, or driven equipment causes an excitation with a frequency that is near to one of the system’s major natural frequencies, resonant vibrations may cause severe overloads which may be several times higher than the nominal load. For more information, refer to ANSI/AGMA 6011-I03, Specification for High Speed Helical Gear Units, Annex D.

Dynamic factor, Kv accounts for internally generated gear tooth loads which are induced by non-conjugate meshing action of the gear teeth. Even if the input torque and speed are constant, significant vibration of the gear masses, and therefore dynamic tooth forces, can exist. These forces result from the relative accelerations between the gears as they vibrate in response to an excitation known as “transmission error”. Ideally, a gear set would have a uniform velocity ratio between the input and output rotation. Transmission error is defined as the departure from uniform relative angular motion of the pair of meshing gears. It is influenced by all the deviations from the ideal gear tooth form and ideal spacing. Dynamic factor, Kv, has been redefined as the reciprocal of that used in previous AGMA standards. It is now greater than 1.0. In earlier AGMA standards it was less than 1.0. (Approximate dynamic factor - see bottom of webpage).

Fd = incremental dynamic tooth load due to the dynamic response of the gear pair to the transmission error excitation, not including the transmitted tangential load, lbs.
Ft = tooth load

Km = load distribution factor is defined as: the peak load intensity divided by the average, or uniformly distributed, load intensity; i.e., the ratio of peak to mean loading.

Manufacturing variation of gears
-- Lead, profile, spacing and runout of both the pinion and the gear.
-- Tooth crowning and end relief.

Assembly variations of installed gears
-- Alignment of the axes of rotation of the pitch cylinders of the pinion and gear as influenced by housing accuracy and concentricity of the bearings.

Its magnitude is affected by two components:

Cmf and Cmt can be interrelated depending on the form of the instantaneous contact line in the plane of action as shown by figure 1. In functional equation form, 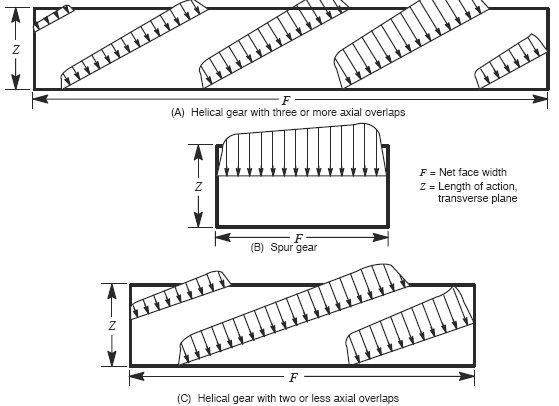 Approximate dynamic factor, Kv Figure 2 shows dynamic factors which can be used in the absence of specific knowledge of the dynamic loads. The curves of figure 1 and the equations given are based on empirical data, and do not account for resonance.

Due to the approximate nature of the empirical curves and the lack of measured tolerance values at the design stage, the dynamic factor curve should be selected based on experience with the manufacturing methods and operating considerations of the design. 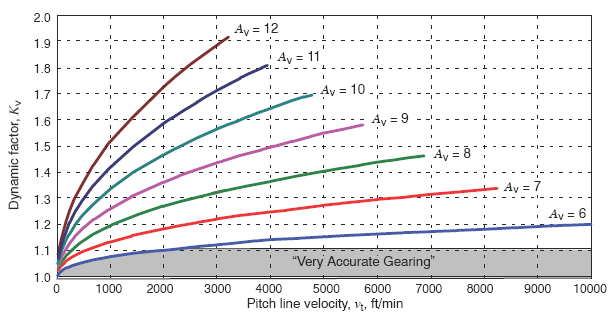 The surface condition factor, Cf, used only in the pitting resistance formula, depends on:

Standard surface condition factors for gear teeth have not yet been established for cases where there is a detrimental surface finish effect. In such cases, some surface finish factor greater than unity should
be used.

The geometry factor, I, evaluates the radii of curvature of the contacting tooth profiles based on tooth geometry. These radii are used to evaluate the Hertzian contact stress in the tooth flank. Effects of modified tooth proportions and load sharing are
considered. 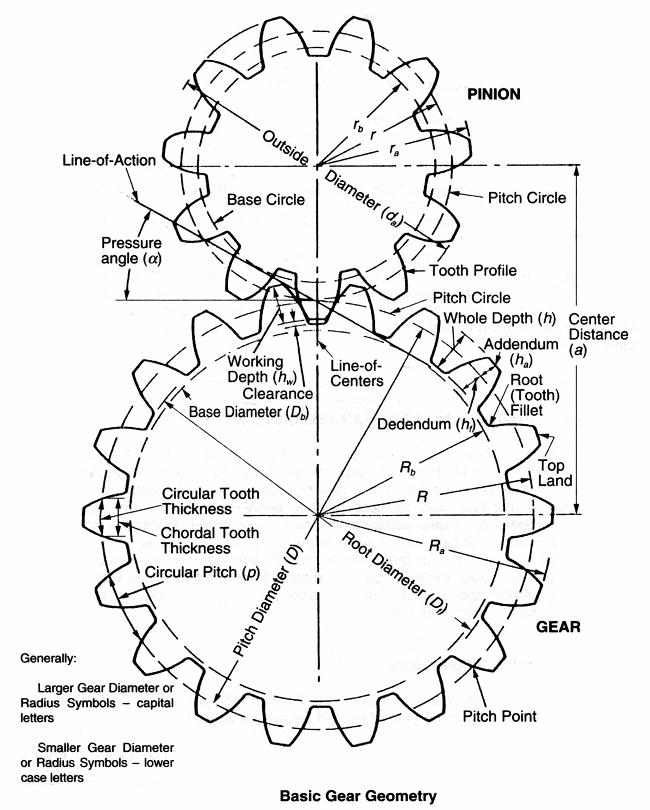