Reaction and deflection formulas for in-plane loading of elastic frame with mounting ends fixed and distributed load on the horizontal member Case 5b formulas and calculator: 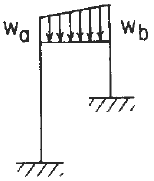 Link to this Webpage: